Plant endosymbionts defend themselves against the hostile host environment 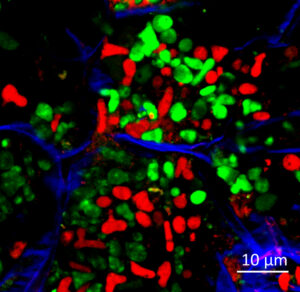 The nitrogen fixing symbiosis of legumes with rhizobium bacteria has a predominant ecological role in the nitrogen cycle and has the potential to provide the nitrogen required for plant growth in agriculture. The host plants allow the nitrogen-fixing rhizobia to colonize the cells of specific symbiotic organs, the nodules, in very large numbers in order to produce sufficient reduced nitrogen for the plant needs. Some legumes, including Medicago spp., produce massively antimicrobial peptides to keep this large bacterial population in check. These peptides, known as NCRs, have the potential to kill the rhizobia but in the nodule cells, they rather inhibit the division of the endosymbionts and trigger them into a morphologically differentiated state, resulting in a high nitrogen fixing activity. In this study published in mBio, the Plant-Bacteria Interactions team of I2BC shows that the bacterial resistance to the antimicrobial activity of the NCR peptides in the Medicago symbiont Sinorhizobium meliloti is multifactorial and requires peptide transporters, the lipopolysaccharide outer membrane and the stress response regulator RpoH1.