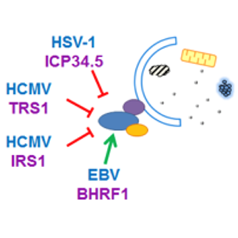 Understanding how and why Herpesviruses hijack autophagy

For many years we have been studying viruses of the Herpesviridae family capable of infecting humans, particularly Herpes Simplex virus type 1 (HSV-1), human cytomegalovirus (HCMV) and Epstein-Barr virus (EBV). These viruses are known for their ability to modulate cell functions and to block cellular defense mechanisms. We are interested in the relationships between viral infection and autophagic process regulation in different contexts.

Herpesviruses hijack the autophagic machinery for their own benefit thanks to various viral proteins. For example, the HSV-1 proteins US11 and ICP34.5 block the formation of autophagosomes. The HCMV TRS1 and IRS1 proteins block both the formation and the maturation of autophagosomes. BHRF1 protein, encoded by EBV, stimulates the autophagic process. Autophagy breaks down and recycles proteins and organelles by trapping them in a double membrane vesicle called an autophagosome.

We have also shown that HCMV hijacked autophagy for its own benefit. HCMV recruits the autophagic machinery at the viral assembly compartment in the cytoplasm and it uses autophagy proteins to optimize the formation of the viral envelope. Several of these proteins are also found in the extracellular viral particles. 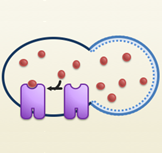 Characterizing the relationship between autophagy and antiviral immunity

Autophagy, as a degradation compartment, is involved in the presentation of antigens by producing peptides that can be loaded onto molecules of the major histocompatibility complex (MHC). Our work highlighted that the targeting of antigens in autophagosomes facilitates their presentation by MHC class II molecules (MHC-II) and significantly improves the activation of antiviral T cells. We now seek to identify the molecular connections between autophagy and antigen presentation. For example, we are studying the contribution of selective autophagy receptors to the presentation of antigens by using invalidation approaches (RNA silencing, CRISPR), cell imaging and mass spectrometry. These techniques allow us to define in particular the cellular interactants and the influence of autophagy on the immunopeptidome. In addition, we are characterizing the escape mechanisms from the immune response developed by viruses, targeting autophagy receptors to limit the activation of CD4 + T lymphocytes. We work with human professional antigen presenting cells like dendritic cells and B cells as well as model cell lines. To address these issues, we generated a library of CD8+ and CD4+ T lymphocyte specific for viral antigens (HIV-1, HCMV).

Cellular infection results in the production of viral nucleic acids and viral proteins. Proteins can be processed by the autophagic machinery to be degraded and presented by the MHC to T lymphocytes. Detection of viral nucleic acids by MAVS, resulting in the production of interferon (IFN), an antiviral molecule, can be blocked by the sequestration and degradation of mitochondria via EBV-induced autophagy.

We have recently shown that the BHRF1, a mitochondrial viral protein encoded by EBV, disrupts the innate immunity. Indeed, the expression of BHRF1 inhibits IFN-β induction. BHRF1 directs the mitochondria towards autophagic degradation and thus blocks the signaling pathway involving MAVS (Mitochondrial AntiViral Signaling). Furthermore, the expression of BHRF1 modifies mitochondrial dynamics and stimulates Drp1-mediated fission, steps necessary for the sequestration of mitochondria in autophagosomes. We seek to further characterize the mechanisms of action of BHRF1, including the role of the cytoskeleton, and to define its cellular partners. 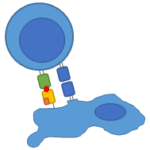 Most of the viral antigens characterized until now are derived from proteins encoded by open reading frames (ORFs) found on viral genomes. However, investigations into alternative reading frames (ARFs) have led to the discovery of new autoimmune, cancer, or viral antigens. In the context of HIV-1 infection, we have demonstrated that peptides derived from viral ARFs are presented by MHC class I molecules and elicit T cell responses specific to this virus in vivo. Currently, we are systematically studying the translation map of HIV-1 polypeptides in order to define new viral antigens. To do so, we are using ribosome profiling and immunopeptidomic approaches. In collaboration with the ANRS clinicians, we are validating and extending our results using patient samples from cohorts.

In the long term, we wish to extend this approach to other viruses to systematically characterize ARFs and identify new viral antigens.