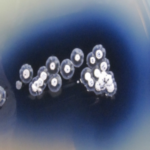 Antibiotics biosynthesis is triggered in condition of phosphate/energy limitation

A – Strategies used to demonstrate the triggering of antibiotics biosynthesis by energetic stress.

Strategy 1: In S. lividans, a strain that does not produce antibiotics, the disruption of the genes sco4144 and ppk /sco4145, led to a great increase in the production of the antibiotics CDA, RED and ACT.
Ppk and sco4144 are co-transcribed but sco4144 can also be transcribed alone from its own promoter. The ppk–sco4144 operon is mainly expressed in condition of Pi limitation and thus belong to the Pho regulon.

– SCO4144 is a phosin-like protein possessing a polyphosphate binding module (CHAD domain). The deletion of sco4144 resulted in the strong induction of genes of the Pho regulon involved in phosphate scavenging and uptake, indicating phosphate stress. SCO4144 was thus proposed to be an accessory factor forcing the polyphosphate into a conformation suitable for their efficient degradation into free Pi by general phosphatases and/or by Ppk that is using polyP as donor of phosphate or energy to generate ATP from ADP. In the absence of this accessory factor, such processes would be less efficient, resulting into Pi/energetic stress and the triggering of antibiotic production.

– Ppk is a bi-functional enzyme bearing both PolyPhosphate Kinase (PPK) / Nucleotide DiPhosphate Kinase (NDPK) activities depending on the ATP/ADP ratio in the reaction mix. Since ppk / sco4145 is mainly expressed in condition of Pi limitation, it is thought to act as an NDPK catalyzing the regeneration of ATP from ADP and polyphosphate. In the absence of this important ATP regenerating enzyme, the strain would suffer energetic stress. Furthermore, since the disruption of ppk was shown to have a polar effect of the expression of sco4144. The low expression of sco4144 in the ppk mutant might contribute to the strong induction of the Pho regulon and to the greatly enhanced antibiotic production also observed in the ppk mutant strain.

Strategy 2: The overexpression in S. lividans of an ATPase constituted by the F0 part of the ATP synthase of this strain, led to an increased production of the antibiotics CDA, RED and ACT, compared to a control strain carrying the genes encoding a non-functional ATPase (ATPase with one of the catalytic subunits mutated). Only the strain carrying the functional ATPase experiences energetic stress and produces antibiotics (manuscript in preparation).

Strategy 3: The overexpression in S. albogriseolus / viridodiastaticus of a synthetic gene encoding a small protein bearing a high affinity for ATP also caused an energetic stress that was correlated with an increase of the weak antibiotic activity of the strain (ANR Innovantibio, manuscript in preparation).
This small synthetic protein called DX was “created” and evolved by John Chaput of the University of California, USA. https://pubmed.ncbi.nlm.nih.gov/23181457/.

B – Expression of genes of the Pho regulon involved in Pi scavenging and uptake is low S. coelicolor

Proteomic comparative studies of S. lividans and S. coelicolor, that are low and high antibiotic producers, respectively, revealed that, in condition of Pi limitation, the expression of two-component system (TCS) PhoR / PhoP was much lower in S. coelicolor than in S. lividans. Since this TCS is known to control positively phosphate (Pi) scavenging and uptake, S. coelicolor is thus severely limited in phosphate and experiences high energetic stress. This difference in the level of expression of genes of the Pho regulon in the two strains is thought to be, at least in part, responsible for their different metabolic characteristics. However, the ultimate cause of the low expression of PhoR/PhoP in S. coelicolor remains to be elucidated.

C – High energetic stress experienced by S. coelicolor causes activation of its oxidative metabolism as an attempt to maintain its energetic balance

Paradoxically, although severely limited in phosphate, the ATP content of S. coelicolor was shown to be 2 to 3 fold higher than that of S. lividans. This high ATP content is correlated with a very active consumption of its polyphosphate reserves as well as with a strong expression of specific enzymes of the TCA cycle or of enzymes involved in the degradation of amino acids that generate reduced co-factors. The re-oxidation of the latter by the respiratory chain provides the energy necessary for ATP synthesis. This suggested that an energetic stress linked to a severe phosphate limitation triggers the activation of the oxidative metabolism as an attempt to restore the cellular energetic balance.

Supporting an active oxidative metabolism requires the consumption of acetylCoA. This is why S. coelicolor and more generally most strains that produce high levels of antibiotics have a low total lipid content.

We recently demonstrated that S. coelicolor, that suffers from phosphate/energetic stress, has both a lower phospholipid (PL) as well as a lower triacylyglycerol (TAG) content than the wild type strain of S. lividans. Membranous phospholipids constitute a huge phosphate reservoir and their biosynthesis is  obviously limited in condition of Pi scarcity

Phospholipids and TAG biosynthesis require high glycerol3P and acetylCoA availability as well as high phosphate availability.Our studies demonstrated that S. lividans has a functional Pho regulon and is thus able to scavenge and uptake phosphate efficiently in condition of Pi limitation. S. lividans is characterized  by a glycolytic metabolism generating sufficient glycerol 3P and acetylCoA to allow efficient PL and TAG synthesis.

In contrast, S. coelicolor is unable to synthetize membranous phospholipids at the same level as the wt strain of S. lividans. This reduced phospholipids biosynthesis  would result into a higher acetylCoA availability used to feed the TCA cycle. This would contribute to the activation of the oxidative metabolism and thus to the restoration of the energetic balance of the strain.

Interestingly this negative correlation between total lipid content and the ability to produce antibiotics was statistically validated with numerous Streptomyces strains.

Conversely, antibiotic production was totally abolished and TAG content was enhanced in strains derived from S. coelicolor, in which genes having a positive impact on TAG biosynthesis (TetR regulator/SCO3201, phospholipase A2/SCO3222, etc.) were over-expressed. The over-expression of these genes likely drains available acetylCoA and prevents the activation of oxidative metabolism and the production of antibiotics. 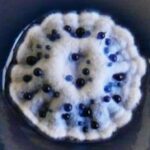 Function of the antibiotics for the producing bacteria

Scavenging and supply of Pi under conditions of low Pi availability is generally ensured by proteins of the Pho regulon under the positive control of the two-component system PhoR/PhoP. The expression of these genes being low in S. coelicolor, this strain is severely limited in Pi and has adopted an alternative strategy to satisfy its P needs. This strategy is the triggering of the biosynthesis of type I antibiotics.

Type I antibiotics would be the first to be induced in a situation of energetic stress, probably via “quorum sensing” (external) or c-di-GMP (internal) signals. These type I antibiotics, that include CDA and RED, are thought to create damage to the membrane, causing the lysis of a fraction of the population and the release of the cellular content of the lysed cells into the environment. The latter would be used as nutrient, and in particular as P source, for the surviving population. This supply of P would support the activation of the oxidative metabolism of the strain in order to restore its energy balance. This phenomenon of programmed cell death (PCD: Programmed Cell Death) is well documented in Streptomyces. The possible role of CDA in PCD has already been discussed and that of RED has been recently demonstrated. PCD of a fraction of the basal mycelium would allow the growth of aerial hyphae which, under adverse conditions, are organs of spores dissemination.

However, when phosphate originating from cell lysis is depleted, the activation of oxidative metabolism and oxidative phosphorylation (ATP synthesis) cannot be sustained. It is in this context that Type II antibiotics are being produced.

The function of type II antibiotics would be to inhibit respiration in order to adjust /reduce ATP synthesis to Pi availability. Their biosynthesis would be triggered by oxidative stress that is linked to the activation of oxidative metabolism.

S. coelicolor and the mutant strains derived from S. lividans (phoP, ppk and sco4144 mutants) produce mainly type I and type II antibiotics, however there is a third type of antibiotics whose production has not been detected in these strains. These type III antibiotics would also help to maintain the intracellular energetic balance. They would not be involved in the generation of ATP nor in the inhibition of this generation, but would rather contribute to a limitation of ATP consumption resulting into ATP saving.

In a situation of energetic stress, type III antibiotics would inhibit some crucial ATP consuming anabolic processes such as DNA / RNA, proteins, lipids or cell wall synthesis. Doing so, they would also contribute the growth arrest of the bacteria. Type III antibiotics are the most commonly used antibiotics in human medicine because they are more specific of bacterial anabolic enzymatic systems than type I and type II antibiotics and are therefore less toxic to human cells than the latter. 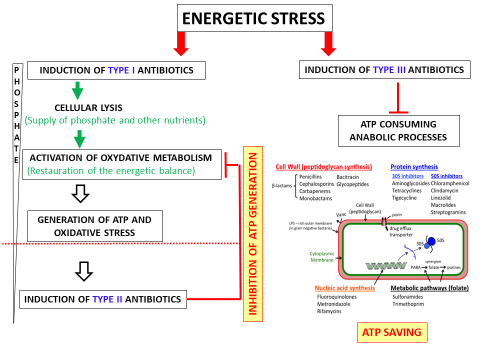 Figure 1: Schematic representation of the three classes of antibiotics and of their function in the regulation of energetic metabolism of the producing bacteria.

The new classification, into three types, of the antibiotics that we proposed is based on the nature of their targets as well as on their role in the regulation of the energetic metabolism of the producing bacteria. This proposed new role is not in contradiction with the role, traditionally proposed for these toxic molecules, that is a role of weapon conferring a selective advantage to their producers in their ecological niche. These two roles simply arise from the two different uses (internal versus external) of the same molecules. Simply, in the producers, the very strict temporal regulation of the biosynthesis of these molecules and the existence of resistance determinants (excretion of the antibiotic, modification of the antibiotic or of its target etc…) limit their toxicity preventing the death of the producing bacteria. Unfortunately, we still ignore whether each Streptomyces specie possesses/uses all of these strategies or only some of them and if these strategies are concomitantly or sequentially triggered ? 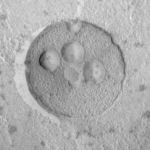 Streptomyces for plants/animals nutrition and health

Streptomyces, as soil bacteria, play an important role in soil fertility as well as in plants nutrition and health. Therefore, in the framework of a Franco-Moroccan program (Incentive Action Program, PAI), we screened for Actinomycetes strains possessing PGPR (Plant Growth Promoting Rhizobacteria) properties. Some isolated strains were shown to have the ability to solubilize insoluble ground rock phosphate as well as to produce molecules limiting growth and spreading of phytopathogenic agents. We characterized a small molecule of the viridomycin family able to chelate the positively charged metallic counter ions of insoluble phosphate, making it soluble and thus available for the plants. The positive impact of these Actinomycetes strains on plant growth and fitness in the presence of insoluble ground rock phosphate and of phytopathogen agents was demonstrated in greenhouse conditions.

The spreading of naturally occurring PGPR microorganisms in agricultural fields might allow the reduction of the input of chemical fertilizers and pesticides / fungicides. Such strategies might contribute to the development of less polluting and thus more sustainable agriculture than the current one.

At last, in the framework of a Franco Tunisian network (CMCU), we also studied phytases originating from Streptomyces species. Indeed, phosphates of inositol phosphate/phytates constitute the major phosphate reserves of cereal seeds but mono gastric animals (chicken, fish, pork), the main consumers of cereal seeds,  do not have the enzymatic capability to dephosphorylate phytates to  make phytate phosphorus bioavailable.  In consequence, the addition of phytases to the diet of these animals greatly enhanced phytase phosphorus bioavailability and thus allows a reduction of the supplementation of these animals with soluble Pi. This strategy  limits an excessive Pi load of their droppings  and consequently reduces the pollution of surface and underground waters. The hydrolysis of phytates also limit the “anti-nutritional” effect of phytates that is due to the chelation of some divalent ions necessary for the proper functioning of the body, by the latter.