Laboratory of Bioenergetics,
Metalloproteins and Stress

The LBMS develops innovative approaches for the study of biological processes. It is particularly interested in the physical mechanisms underlying photosynthesis and its regulation, and more generally in the cascades of reactions induced by the absorption of photons by biological chromophores. In parallel, this laboratory has recently begun the study of artificial photocatalysts and their chemical reactivity.

Harvesting solar photons is essential for ensuring the proper bioenergetic balance in photosynthetic organisms. The photosynthetic apparatus is designed to harvest solar photons and to transfer the energy to photosynthetic reaction centres, where the excitation energy is transduced into chemical potential energy. A fascinating property of natural photosynthetic systems is that they perform ultrafast energy and charge transfer at high efficiency, in spite of the defects and energy traps that are an unavoidable consequence of static and dynamic disorder. In light-limiting conditions, 90 % or more of the photons absorbed by photosynthetic organisms can be used to drive one charge separation. Our laboratory is part of a large-scale, international project to determine whether photosynthetic energy transfer exhibits a quantum character – does the system explore more than one transfer pathway at the same time? – as well as whether vibrational coupling aides the transfer process. We investigate the light-harvesting systems of purple bacteria, algae and higher plants, as isolated proteins and in more intact structures, in order to determine to what extent these phenomenon are responsible for the extremely high quantum yield of natural photosynthesis.

Carotenoids are natural tetraterpenoids, present in all biological kingdoms, which play central roles in photosynthesis. They harvest solar photons in the blue-green range, and also play an essential role in photoprotection – through the quenching of chlorophyll triplet and singlet states, and of singlet oxygen. Our team recently discovered that carotenoid self-assemblies, such as those present in tomato chromoplasts, exhibit additional photochemistry, dissipating excitation energy via singlet fission. In this process one singlet excited state splits into two triplet-excited states, thus generating two excitons from one photon. Recent experiments performed on daffodils indicate that this process is a general property of carotenoid-containing chromoplasts, although the yield is variable. We wish to understand the mechanisms underlying the singlet fission process in self-assembled carotenoids and their possible involvement in mechanisms of photoprotection. Additionally, we are exploring possible applications of singlet fission for improving yields of photocatalysis – as it doubles the theoretical efficiency of photon-to-charge conversion, to 200 %.

The current model for energy production relies on fossil fuels, which are a limited resource and generate CO2, a greenhouse gas that induces perturbations of the planet’s climate. Through photosynthesis, solar radiation provides the energy to power the biosphere. Despite a huge effort in this area, the high level of efficiency observed for biological photosynthesis has yet to be even approached in artificial systems. Our group is applying the lessons learned from Nature to design structures that are precisely organized to optimally exploit quantum mechanical effects in such processes. We are interested in creating bio-inspired artificial structures capable of mimicking specific steps of the photosynthetic process. The ultimate goal is not to reproduce the natural process, but to use bio-inspiration combined with modern synthetic techniques to improve the efficiency of solar energy harvesting and contribute to a sustainable green energy model.

Figure 1| Comparison of a carotenoid-chlorophyll pair in the crystal structure of LHCII with an artificial antenna system.

The team is also involved in developing original methods of super-resolution microscopy, which we use for studying the structure of the photosynthetic membrane. Our fluorescence approach is presently the only microscopic method able to describe autofluorescence from photosynthetic membranes at a resolution of ca. 150 nm but more importantly with an axial (z) resolution of 300 nm (λem = 525 nm), thus greatly reducing the contamination of the out-of-focus signal. Due to the relatively high axial resolution of this method, it complements other super-resolution techniques and it thus is ideally suited to study the architecture of the photosynthetic apparatus in vivo. This method is used to investigate the 3-D structure of the photosynthetic membrane at a mesoscopic scale, which will allow us to remodel the architecture as a function environmental adaptation (e.g. quality and quantity of incident irradiation). We are developing our systems to include transmission and Raman variants designed to provide, in the long term, super-resolution pictures containing chemical information. A part of our team also conducts research in the field of computational biology and chemistry. In particular, we apply theoretical techniques, such as classical and quantum Molecular dynamics (MD) simulations, to develop models and software for studying challenging biophysical phenomena closely related to biophysics and biology. In particular, we study detergents assemblies (e.g. direct and inverted micelles) and their interactions with biomolecules. We develop innovative approaches to build molecular potentials (or force fields) for various types of detergent and bolaamphiphilic molecules. These new potentials have been used to characterize with various MD approaches, the structure of models of membranes, pure micelles in presence of organic pollutants or micelles with large membrane protein complexes, such as the LH2 complex of the purple bacteria Rhodopseudomonas acidophila or the heme/hemoglobin outer membrane transporter, ShuA from Shigella dysenteriae. In combination with studies on membrane proteins, we also develop theoretical methods to compute and interpret small angle X-ray scattering spectra especially suited for large molecular complexes. 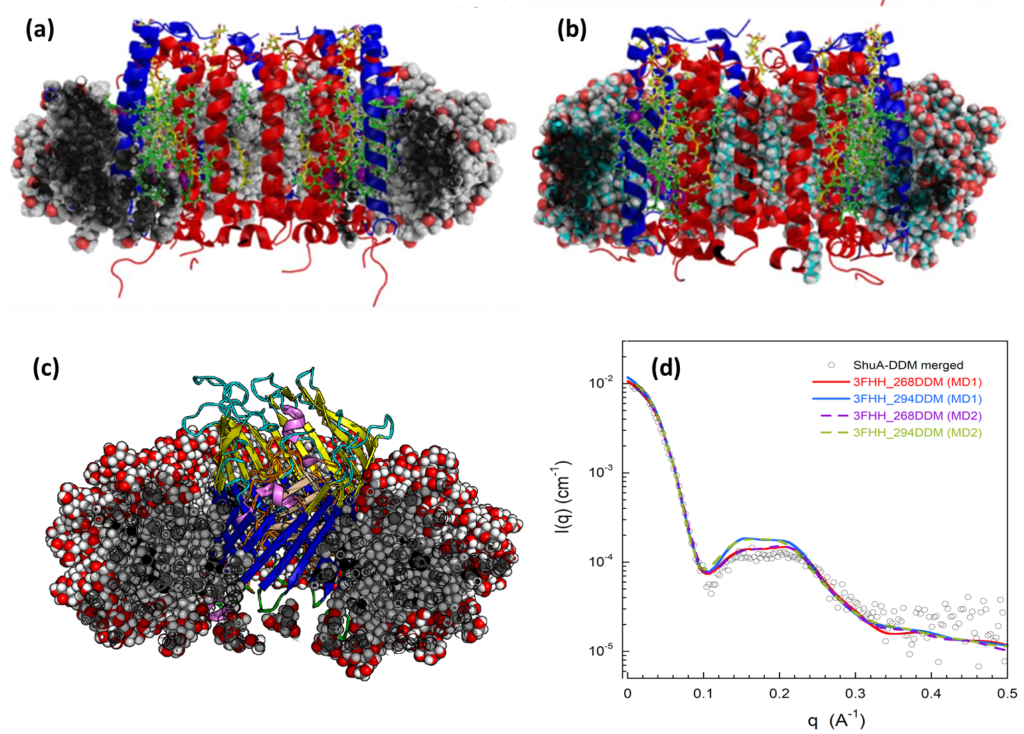 Figure 3: Molecular models of the LH2 (a and b) and ShuA (c) membrane proteins in different detergents environments (i.e. (a) LDAO (b) bOG and (c) DDM. (d) Comparison of the experimental and theoretical SAXS profiles from different MD trajectories